Having worked with Availability Groups (AG) and dealt with issues at cluster and AG levels, I felt the need to do a write up on different failover scenarios and remediation in each scenario. This is one article I take pride in sharing. Hopefully, someone will find it useful.
This article assumes that reader already has basic knowledge/understanding of AGs and Windows clustering.


Availability Groups use a combination of Mirroring (though a more efficient form) at SQL level and Clustering at Windows level to provide high availability/DR capability to SQL databases. Mirroring keeps data between primary and secondary databases of AG in sync. Windows Clustering keeps track of status of AGs and manages failover of AGs between nodes. SQL server is responsible for bringing the DBs online after Windows cluster fails over AG to a node. Multiple DBs can be part of one AG and they failover as one unit, either all or none can failover.


Databases of an AG failover; SQL instances do not fail over. In fact, you can install SQL instance first and setup clustering later.
There is option available to use a combination of traditional SQL clustering (Failover Clustered Instance FCI) and AGs between clustered instances. However, automatic failover of AG is not available in this option.


I have found that it is even more important for DBAs to understanding Windows Clustering now with AGs than it was with FCI. This helps in understanding issues, troubleshooting them, and better communication between DBA and Server teams. Let us map configuration of AG in SQL server to what happens in cluster at Windows level.


Setup of Windows Cluster is a pre-requisite for setting up AGs in SQL. 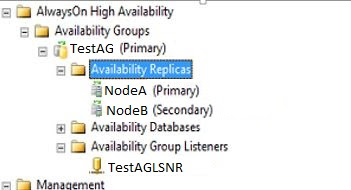 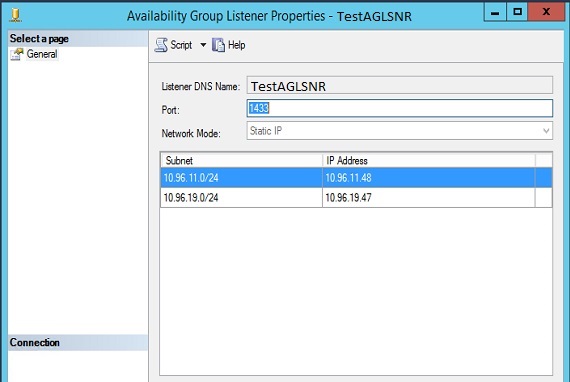 
Figure 3 shows properties of AG. The two replicas are setup with Synchronous Commit and Automatic Failover modes. Currently the AG databases are online on NodeA and so that is in Primary role. Note that role Primary and Secondary switch when AG is failed over to NodeB.


Figure 4 shows Failover Cluster Manager console. Let us see how AG configuration at SQL shows up as resources in cluster. The AG name TestAG shows up as a Role and a resource within role as Other Resources. AG listener TestAGLSNR shows up as Server Name, actually it’s a virtual network name. IP addresses assigned to TestAGLSNR show up as IPs under the virtual network name with one IP online. This is the IP that belongs to subnet of node where AG resides at the moment. The other IP is offline until AG fails over to the other node in which case the offline IP will become online and current online IP will go offline.


Automatic failover setting at AG level shows up as checkmarks in “Possible Owners” setting for AG resource “TestAG” at cluster level as in Figure 5. 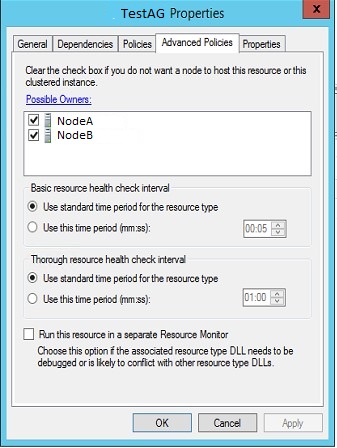 Requirements for an AG to failover

Note that in point 2, first three conditions are at cluster level and last condition is at SQL server level.


Setup for testing the scenarios is given in figure 6. 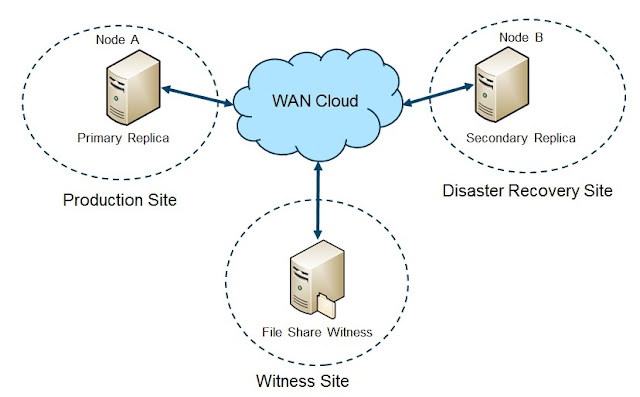 
A Windows cluster with two nodes and a File Share Witness (FSW) has been setup. Each node and FSW is in different location and subnet. Each node can reach FSW independently. An AG is setup between primary and secondary replica with synchronous commit and automatic failover. Secondary replica is setup to be non-readable.


Let us look at some of the failure scenarios on this setup. Each scenario has a combination of state of synchronization of DBs at secondary replica and type of failure that happens.

Let us discuss each of the scenarios in detail. I find following logic of thinking really useful in understanding what will happen after failure has occurred


Failure Scenario 1: Databases in AG are in SYNCHRONIZED state and primary node or primary SQL instance goes down.
This is a straight forward scenario. If primary SQL instance goes down, cluster service detects that AG is not available anymore and it will failover AG to secondary replica. If the primary node goes down, secondary node and file share witness still form quorum for cluster to operate. In this case as well, cluster service will failover AG to secondary node.


Failure Scenario 2: One or more databases are not in SYNCHRONIZED state on secondary replica and primary SQL instance goes down. Primary node is still up and part of cluster.
Since the primary node is still up, cluster quorum has not changed at all. Cluster service will see that AG resources have gone down and it will start failover to secondary replica. SQL on secondary node will however fail to bring DBs online since the DBs were not in SYNCHRONIZED at the time of failover. Cluster service will see that the AG resources failed to come online on secondary node. It will fail the AG back to primary node, where AG cannot come up anyway since SQL itself is down. Cluster service will keep failing back and forth the AG until the maximum number of failures is exhausted. This is a setting in role definition of AG in cluster as in Figure 7. After maximum number of failures is exhausted, cluster service will stop failover of AG and AG will remain in failed state on the node where it was when this number got exhausted. If secondary DBs were setup with being readable, they will continue to be readable but will not be available for write. 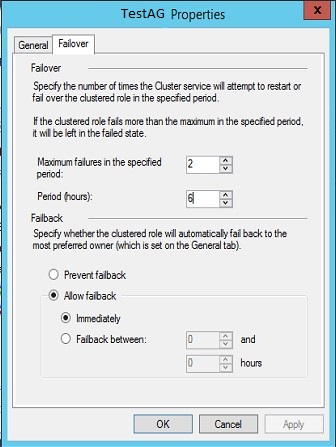 Figure 7
If you want to bring databases online on secondary, force failover AGs with possibility of data loss.


Failure Scenario 3: One or more databases are not in SYNCHRONIZED state and primary node and in turn primary SQL instance also go down.
Secondary node will detect that primary node has gone down and will try to establish new quorum by trying to lock file in File Share Witness. It will be successful in doing so and maintaining quorum and keep the cluster up. Cluster service would now failover AG to secondary node where it will fail since SQL will not bring DBs up due to DBs being not in SYNCHRONIZED state when failure happened. If secondary DBs were setup with being readable, they will continue to be readable but will not be available for write.


If you want to bring databases online on secondary, force failover AGs with possibility of data loss.


Failure Scenario 4: Databases of AG in SYNCHRONIZED state and Primary node’s cluster service goes down for some reason.
Secondary node will detect that primary node’s cluster service is not responding and it will try to establish new quorum by trying to lock file in File Share Witness. It will be successful in doing so and maintaining quorum and keep the cluster up. Cluster service would now failover AG to secondary node where SQL will bring database up DBs were in SYNCHRONIZED state when failure happened. Primary SQL instance will make its databases that were part of this AG unavailable.


Failure Scenario 5: One or more databases of AG are not in SYNCHRONIZED state and Primary node’s cluster service goes down for some reason.
Secondary node will detect that primary node’s cluster service is not responding and it will try to establish new quorum by trying to lock file in File Share Witness. It will be successful in doing so and maintaining quorum and keep the cluster up. Cluster service would now failover AG to secondary node where SQL will fail to bring database online as DBs were not in SYNCHRONIZED state when failure happened. If secondary DBs were setup with being readable, they will continue to be readable but will not be available for write. Primary SQL instance will make its databases that were part of this AG unavailable.


Failure Scenario 6: Primary or Secondary node’s HADR Endpoint goes down
If HADR endpoint of primary or secondary SQL server goes down, databases stop synchronizing data but, primary databases do not stop working. They keep doing transactions without those transactions going to secondary replica. The AG remains up although in unhealthy state. Cluster service does not see any resource being down and so it does not failover resources. This illustrates that configuring synchronous commit with auto failover does not guarantee that secondary will always be in sync with primary. Once the endpoint on primary comes up, databases will start synchronizing data.


If you want to bring databases online on secondary replica, force failover AGs with possibility of data loss.
This scenario is interesting compared to mirroring with witness. If Mirroring endpoint on principal only fails, the mirror server will failover databases to itself and become principal. This is due to the fact that mirror and witness can both see each other(on endopints) but not the principal. All their checks happen on mirroring endpoints. After end point on old principal comes up, it will take its mirrored databases offline and become mirror to receive updates from new principal.


In case mirroring endpoint on mirror only fails, primary continues to run transactions and keep its databases up since it can see witness.


Failure Scenario 7: DBs part of AG on Primary SQL instance go offline or become unavailable due to one of its files being unavailable.
Surprisingly, failover does not happen in this case either. The problem databases go out of “SYNCHRONIZED” state on secondary while other databases keep doing transactions. AG resources do not go down and so the cluster service does not attempt failover of AGs.


If you want to failover AGs in this scenario, it will be a manual failover with possibility of data loss, which SQL will also tell you when you failover. SQL will also show which databases could lose data and which won’t.


Failure Scenario 8: DBs of AG were in sync but at some point stop synchronizing. This could be due to secondary running out of space.
Databases are obviously not synchronizing at this time but, primary keeps the databases running and transactions keep going through.


Failure Scenario 9: DBs in Synchronized state. Primary sends a commit transaction log record to Secondary. Secondary hardens the log record and sends acknowledgment back to Primary. Primary goes down before it could send commit message to client/application.
This is a rare scenario that I could not reproduce. But in my discussions with other SQL experts, they have expressed that this is very much possible.


You may be thinking that I did not cover network failures at site level in failure scenarios. Well, it was on purpose. I would like to cover that along with a perspective of where FSW can be placed in the next section. You could replace FSW with an odd node and all the points discussed below would still apply.

Placement of File Share Witness (FSW) and Impact on Failover


All scenarios below assume that databases are “SYNCHRONIZED” on secondary side when network disconnect happens. 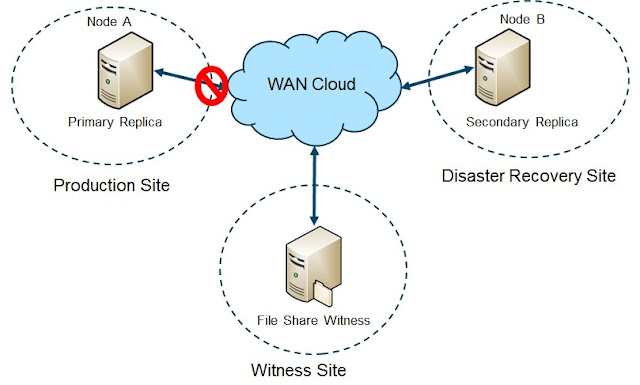 
Now, let us consider that third site is not available for placing FSW on. This is the situation in several companies.
Referring figure 9, FSW is placed in DR site. If primary site loses network connection, secondary replica and FSW form new quorum and failover AGs to secondary replica.

As you can see, windows cluster and SQL each have an impact on failover of AGs between nodes. As a DBA, I consider it essential to understand how Windows cluster works before one can design and support AG infrastructure effectively.
Posted by Unknown at 11:55 AM